The number of movies set in Hawaii are numerous, but the actual number of films shot in Hawaii is enormous. Why the disparity? Many of the films shot here are using Hawaii as a fictional backdrop or stand-in for a different place. Using TV as an example, "Hawaii 5-0" is shot on and is based on Oahu. Meanwhile, "Lost" was shot in Hawaii, but on the show the mysterious island is definitely not Hawaii (though there were a few episodes where Hawaii is used as a locale). With that in mind, here are our top 10 favorite movies shot in Hawaii, some we're guessing, you didn't realize were filmed here. 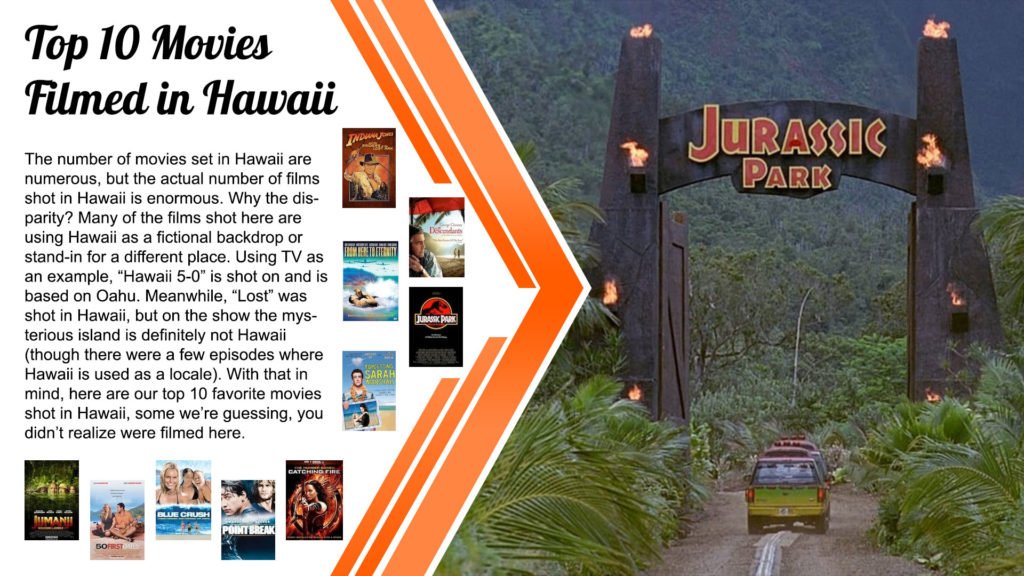 1. Raiders of the Lost Ark (1981)
The movie takes place all over the world, but for the iconic opening scene, one of the greatest opening scenes of all-time, Kauai steps in as the double for the Peruvian jungle. Who can ever forget the giant round rock chasing Indy through the booby trapped temple? The temple is on the grounds of the Kipu Ranch, near Lihue. Kipu Ranch is a working cattle ranch, but if you'd like to see where the movie was filmed, you can take a tour here.

2. The Descendants (2011)
George Clooney starred in this Oscar-nominated movie shot on Oahu and Kauai. Clooney's character lives in a neighborhood east of Waikiki called Nu'uanu. Other locations include the Elks Club in Honolulu (standing in for the Outrigger Canoe Club), Hanalei Bay in Kauai, and Kauai's Tahiti Nui bar. While a great movie in its own right, it really hits home to residents of Hawaii and it shines the spotlight on the difficulties of balancing Hawaiian history and culture with modernization.

3. From Here to Eternity (1953)
While we think "Raiders of the Lost Ark" has an iconic opening scene, the 'beach kiss' scene of "From Here to Eternity" is one of the most iconic scenes EVER FILMED. The kiss between Sgt. Milton Warden and Karen Holmes (Burt Lancaster and Deborah Kerr) takes place in Halona Beach Cove on Oahu. The beach is nicknamed Eternity Beach for obvious reasons.

4. Jurassic Park (1993)
Eleven years after he filmed "Raiders of the Lost Ark" on Kauai, director Steven Spielberg returned to Hawaii to shoot "Jurassic Park". While the majority of the filming took place on Kauai (stepping in for the fictional Isla Nublar), there's a memorable scene shot here on Maui. People often refer to the scene as the opening scene, but that's incorrect. About 16 minutes into the movie, the music crests and a helicopter carrying the main characters flies over a large rock as they head to the Jurassic Park. That rock, in real life, can best be seen from helicopter or from the Garden of Eden on the Road to Hana.

5. Forgetting Sarah Marshall (2008)
Filmed almost entirely on location at the Turtle Beach resort on Oahu's famed north shore, "Forgetting Sarah Marshall" is definitely our favorite comedy shot in Hawaii. The film acts as almost a 90 minute commercial for the resort. We definitely wanted to stay there after seeing the movie. The film does a great job highlighting the beauty of the north shore and is just flat out funny.

6. Hunger Games: Catching Fire (2013)
It may surprise you that the battle arena of "Catching Fire" was shot in Hawaii (it did us). But after re-watching it for this article, we can definitely see it. The movie filmed the brutal cornucopia scene near the Turtle Bay resort at Kawela Bay. The jungle scenes were shot primarily in Waimea Valley and at the always popular Waimea Falls.

7. Point Break (1991)
Both the original and the recent remake shot scenes here in Hawaii, but we're going to focus on the original, starring Keanu Reeves (Johnny Utah) and Patrick Swayze (Bodhi). While Reeves did learn how to surf for the movie, we highly doubt he was on board for the scenes shot at Waimea Bay, Sunset and Pipeline of Oahu's North Shore. The final scene where Bodhi attempts to ride the "50-Year Storm" wave purports to take place at Bells Beach in Australia, but it was actually shot in Oregon, while the wave itself was from Waimea Bay. Got that?

8. Blue Crush (2002)
Filmed on location on Oahu, "Blue Crush" follows a young surfer as she chases her dreams to join the WSL pro surfing tour. The best surfing scenes are shot on the North Shore, including Pipeline, where the movie climaxes. The hotel where the girls work is the Marriott at Ko Olina. To this day, as far as fictional movies go, we like the surfing in this movie the best.

9. 50 First Dates (2004)
This charming rom-com stars Adam Sandler and Drew Barrymore and is shot almost entirely on Oahu. Sandler's character works at Sea Life Park in Waimanolo, but they shot all over the island, finding smaller locations and using non-actor locals in many scenes. We like that they purposefully dodged Waikiki. By skipping the tourist hub of Oahu, the movie has a smaller, intimate feel.

10. Jumanji: Welcome to the Jungle (2017)
The most recent addition to the "shot in Hawaii" movies, "Jumanji: Welcome to the Jungle", starring Hawaii native The Rock, was shot primarily on Oahu, with many exteriors shot at Kualoa Ranch. If the place looks familiar to you, that's because "Jurassic Park", "Godzilla", "50 First Dates" and "Lost" (this where Hurley set up his golf course), among other movies and TV shows were filmed at the ranch. If you're on Oahu and want to tour the ranch, they have a special "movie lot" tour here. There's also a cool waterfall jump scene that was filmed in Papaikou on the Big Island. The Rock will back in Hawaii to shoot "The Jungle Cruise" for Disney in 2018.

Do you have a favorite film shot in Hawaii? Tell us in the comments below. Mahalo!